Thousands bid farewell to Maradona in Argentina amid clashes

Move over St. Paul: Napoli stadium to be named for Maradona

What is President Trump doing on Thanksgiving?

Colorado Gov. Polis is in quarantine after coronavirus exposure

Live Updates: Georgia secretary of state accuses Trump of throwing him 'under the bus' amid legal fight

Breaking News: Shooting in Philadelphia, Looks Like An Ambush

Philadelphia Police Commissioner Richard Ross: The stand off is still ongoing and no indication suspect is planning to surrender. Around 4:30 pm ET, officers were serving a narcotics warrant on a house on 3600 block on north 15th street when officers entered the premises and got towards the rear kitchen area the shooter fired multiple rounds and officers returned fire and some of the officers had to escape through doors and windows from a barrage of bullets. All six officers struck by gunfire thankfully are in stable condition. This situation is in no way resolved and are trying to talk to the shooter telling him he can end this peacefully now.

This shooting started at 4:30 pm ET. This is still a very active ongoing shooting. So far the news say the police were responding to a narcotics problem. Hundreds of shots were fired and six officers were shot and none of the injuries is life threatening. There are now reports the suspect is live streaming the entire shooting on Facebook.

A Swat Team is now on the scene and a massive police presence with ATF and FBI on the scene. People said they heard hundreds of rounds of shots. This shooting unraveled very quickly and very dangerously. The shooting has been going on for at least one and half hours. There are snipers on roof tops trying to get a glimpse of the shooter(s) and trying to assess the situation from an elevated view. President Trump has been briefed on the situation and the White House is closely monitoring the situation.

This is not a hostage situation. The narcotics strike force is a part of responding to this shooting. Stay tuned for more information. Charles Ramsey, Former Washington DC Police Chief does consider this to be a mass shooting with six policemen being shot. There has been an ongoing violence directed toward the police. Anthony Ferrante, Former FBI Special Agent said they are setting up a safety parameter, evacuating citizens and establishing a command post. 08/14/19 7:55 pm et, police are currently trying to negotiate with the shooter(s). There are two officers who are trapped in the building who were trying to help citizens to safety. There were four women who are very grateful to the police for risking their lives and escorted them out of the building to safety. ~ Natalie

PHILADELPHIA—Several Philadelphia police officers were shot Wednesday afternoon in what is being called an “active and ongoing” shooting situation in the city.

Philadelphia Police Sgt. Eric Gripp tweeted there was at least one suspect firing at police officers in the city’s Nicetown neighborhood.

Shooting situation ACTIVE and ONGOING on 3700 15th St. Avoid Area. Several PPD Officers have been injured. Updates will be provided as received

BREAKING: Video shows officers with guns drawn during a shooting incident in Philadelphia. Several officers have been shot: https://t.co/ti23f95H1S pic.twitter.com/QTGrk218kO

Shooting situation ACTIVE and ONGOING on 3700 15th St. Avoid Area. Several PPD Officers have been injured. Updates will be provided as received

422 people are talking about this

A police spokesman confirmed the shooting but offered no other information.

Live video from news statins shows a massive police presence in a neighborhood with dozens of police cars and officers, many of them with their guns drawn.

BREAKING: Video shows officers with guns drawn during a shooting incident in Philadelphia. Several officers have been shot: https://bit.ly/33y9k4e 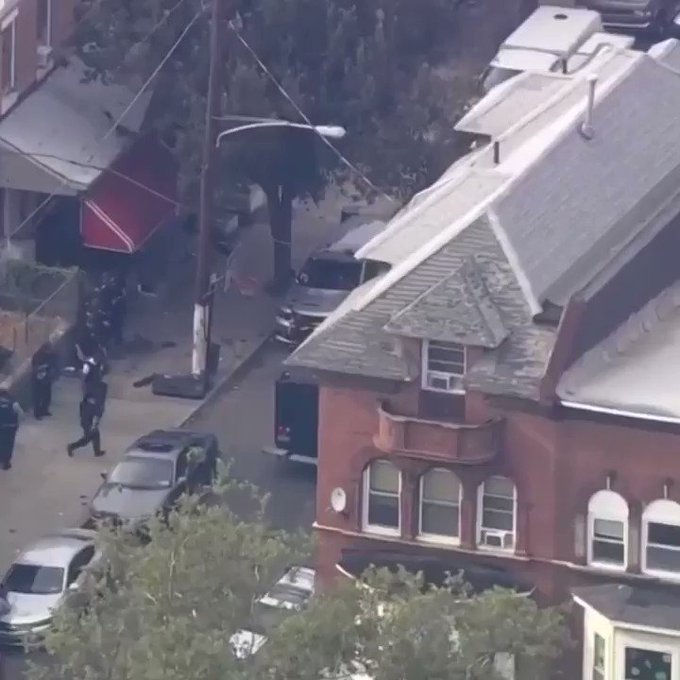 Gunshots are continuing to be heard late Wednesday afternoon.

One officer appeared injured and was taken away in a police car. Video also showed two other officers carrying a man and putting them in the back of a police car.

HAPPENING NOW: Live coverage as at least one suspect is firing at officers in an ongoing shooting incident in Philadelphia.

240 people are talking about this

JUST IN: Police are responding to a shooting in Philadelphia. This story is developing. https://cnn.it/31D4m4j

Police responding to a shooting in Philadelphia

Philadelphia police swarmed the area near a shooting in the city, Sgt. Eric Gripp said Wednesday via Twitter.

829 people are talking about this

The Bureau of Alcohol, Tobacco, Firearms and Explosives said numerous agents are responding to the scene to assist Philadelphia police.

Police are asking that news helicopters stay away from the area as they are hindering operations.

MEDIA HELICOPTERS: PULL BACK FROM THE AREA – YOU ARE HINDERING OPERATIONS

289 people are talking about this

Jeffrey Epstein: Proof Prince Andrew’s girl was paraded at VIP parties?
Jeffrey Epstein had a painting of Bill Clinton wearing a blue DRESS and red heels in his home

Search this site and the web